Skip to content Menu Close
“In sainthood, there is no difference between man and woman, Gentile and Jew, rich or poor. The only difference is how much your heart is attached to the Lord, and how much your heart is dedicated to the Lord. This is the way to be saints, all of us.”
His Eminence Metropolitan Antonios, Patriarchal Vicar, continued his series of pastoral visits, celebrating the Hierarchal Divine Liturgy at St. George Orthodox Church Little Falls, NJ on Sunday, December 4. He told the clergy and congregation that His Beatitude Patriarch John X of Antioch and All the East loves them very much and prays for them and for this Archdiocese.
Sayidna Antonios preached on Sunday’s Epistle of St. Paul to the Galatians (3:27-28): “For as many of you as were baptized into Christ have put on Christ. There is neither Jew nor Greek, there is neither slave nor free, there is neither male nor female; for you are all one in Christ Jesus.”
“When one is baptized, he enters the waters as XYZ, and he comes out of the waters as Christ. This is not something magical,” he said. “It is something that we should accomplish because we were given the potential and grace to be like Christ.
“In order for the grace of God to work in us, it requires our own will. God cooperates with us. He doesn’t force us to do His will or to be in His image, even though every human was created in the image of God.”
His Eminence added that we live in our Lord’s image by keeping his virtues, primarily love, because all virtues emanate from that. “In our life, we have to struggle, to pray, to fast, to take from our needs and give to whom is more needy than us. This is how we live the true and divine love.”
At the conclusion of the liturgy, Sayidna Antonios inducted two members into the Order of St. Ignatius of Antioch. He then held a dialogue with the congregation to explain the nomination process for the next Metropolitan of the Archdiocese.
Antiochian.org #orthodoxy 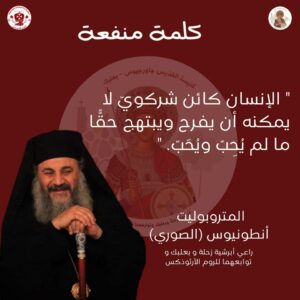 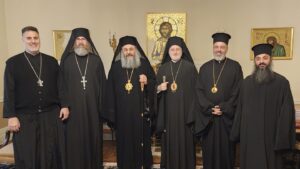 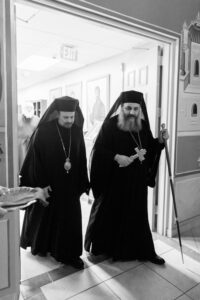